Any person or entity that is not a party to the dispute can apply for permission to file a written submission in the case (Non-disputing party submission, Arbitration Rule 67).

Similarly, a State which is not a party to the dispute but which is a Contracting Party to the treaty upon which consent to the ICSID arbitration was based can make a submission on certain questions as a matter of right (Non-disputing Treaty Party submission, Arbitration Rule 68).​

A non-disputing party (NDP) is an individual or entity that is not a party to the dispute but that can assist the Tribunal in deciding the dispute by providing a perspective different from that of the parties. Upon request, the NDP may be permitted to file a written submission in the proceeding, for example because they have certain expertise concerning the subject-matter of the dispute.

In deciding whether to allow the NDP submission, the Tribunal must take into account certain factors :

The application to file an NDP submission should address these factors and all other relevant circumstances. 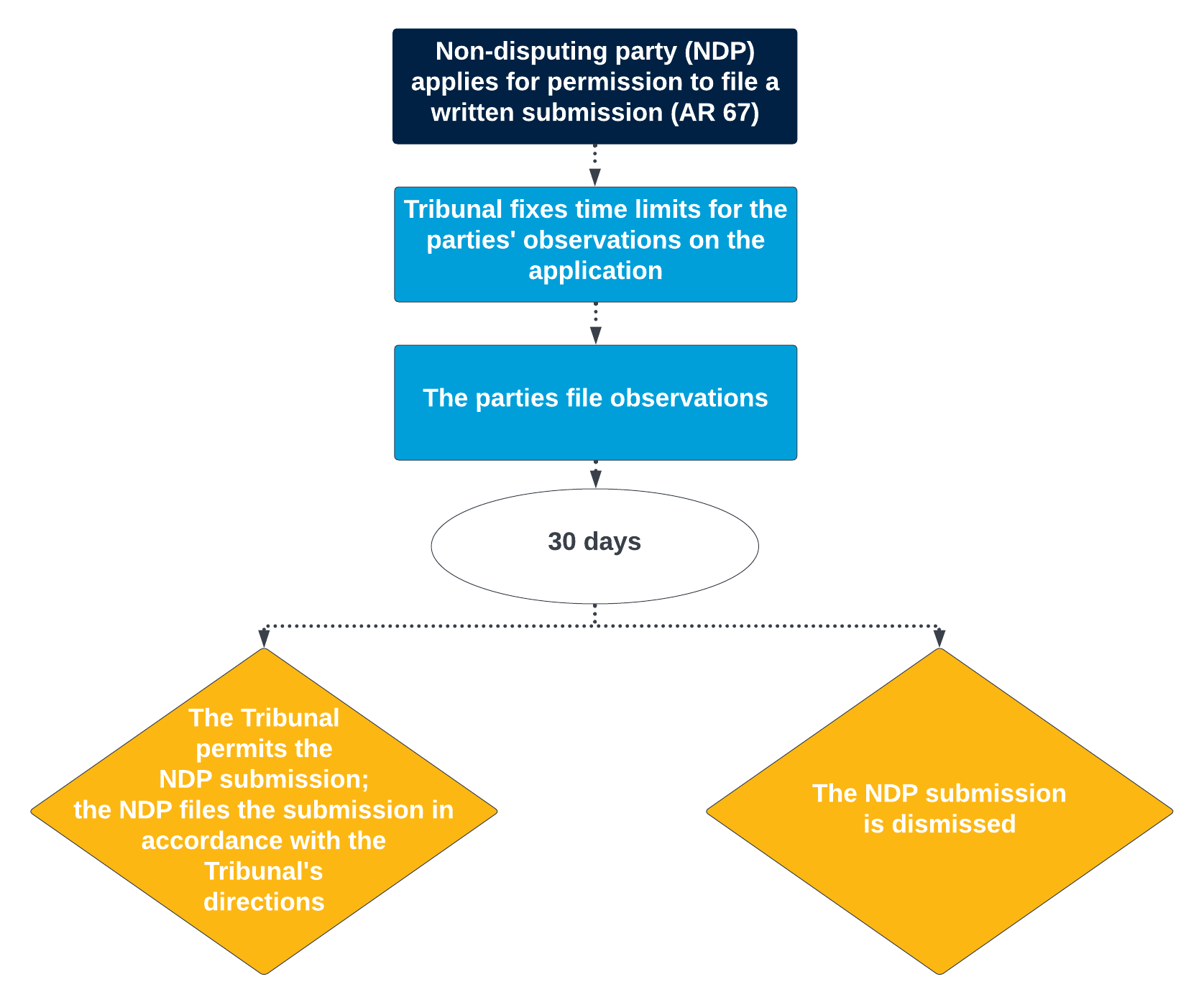 If the Tribunal permits the NDP to file a written submission, it must ensure that the NDP participation does not disrupt the proceeding or unduly burden or unfairly prejudice either party (Arbitration Rule 67(5)). The Tribunal can impose conditions, including with respect to the time limit, format, length, scope or publication of the submission. For example, Tribunals often order page limits.

If the NDP requires access to non-public documents filed in the proceeding to formulate its submission (e.g., the parties’ pleadings), the Tribunal may allow such access, unless either party objects (Arbitration Rule 67(6)). The parties may subsequently make observations on the NDP submission.

Some treaties address the right of non-disputing parties to participate in an arbitration and the criteria applicable to such participation (see e.g., Canada-Peru Free Trade Agreement (2009), Article 836).

State Parties to a treaty which are not parties to the dispute (NDTP) have a right to make a submission on the interpretation of that treaty if it is at issue in the dispute and if consent to arbitration is based on it. A regional economic integration organization (REIO) which is a Party to the relevant treaty could also act as an NDTP.

Before allowing an NDTP submission, the Tribunal will consult with the parties to determine whether such submission should be made orally, in writing, or both.

As with NDP submissions, the Tribunal must ensure that NDTP participation does not disrupt the proceeding or unduly burden or unfairly prejudice either party (Arbitration Rule 68(2)). The Tribunal may impose conditions on the making of the NDTP submission, and the parties may make observations on the submission.

NDTPs may also have a right under the treaty upon which consent to arbitration is based to make submissions on a question of application or interpretation of the treaty (see e.g., Canada-Peru Free Trade Agreement (2009), Article 832).