ICSID’s case-related statistics reports—released twice each year—are a key resource for the study of international investment law. Each report accounts for trends in ICSID’s overall caseload—going back to the first case in 1972—as well as developments 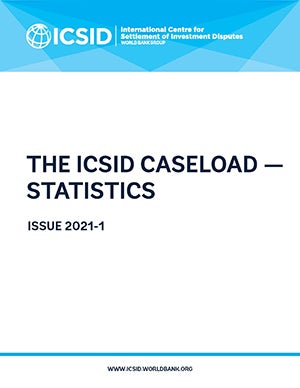 over the previous calendar or fiscal year. Damon Vis-Dunbar, ICSID communications officer, spoke with Ana Constanza Conover Blancas, ICSID legal counsel and lead on the Centre’s statistical work, about the data that ICSID tracks and what it reveals about the ICSID caseload.

Let’s start with the longer-term trends in the ICSID caseload. How has it evolved?

One of the first things to note is the number of cases. For example, we report on the number of new cases registered by year, and the figures were fairly low from the early 70’s to the mid 90’s—on average about two new cases a year. The case numbers started to climb in the late 90’s and 2000’s: first to around 10 new cases, then 20, and up to the current average of 35 to 50 cases filed per year, which is where the numbers have stabilized over the last 10 years or so.

What do you see as the factors driving that trend?

Some of the factors may include the increase in foreign investment flows over the past decades. Foreign investment increased sharply in the mid-90s and has almost quadrupled in the past 20 years. The number of international investment agreements in force is another factor. These have grown from about 400 in 1980 to an estimated 3200 in 2020, and ICSID is offered as a forum for dispute settlement in the vast majority of these treaties.

I would also suggest that the unique features of ICSID make it most attractive to parties. ICSID is an independent, impartial and self-contained system, and the Centre’s Secretariat has a wealth of expertise in international investment dispute settlement.

For those who are new to the ICSID system, can you explain how cases are brought to ICSID?

The first point to understand is that it is consensual. States provide their consent in a variety of legal instruments, but the main categories are treaties, contracts and domestic laws.

Treaties account for the largest share of cases. A continuing trend is that over 75% of ICSID cases are based on consent in an investment treaty concluded by States. In about 60% of cases, a bilateral investment treaty is invoked as the basis of consent to establish ICSID jurisdiction. The Energy Charter Treaty—which is a multilateral treaty that governs investments in the energy sector—is also frequently invoked, accounting for about 10% of cases. And then we see other multilateral treaties, including free trade agreements, accounting for the remaining cases registered each year in this category.

Investment contracts between an investor and host State account for 15% of cases registered, and domestic laws of the host state for 8%. That is basically the breakdown.

The oil, gas and mining sector, and the energy sector, have consistently accounted for a significant share of cases—about 40%. The construction sector also accounts for a significant share of cases; for example, 17% of cases registered in 2020 and 15% in 2019. Overall, however, there is also a lot of variety in the cases registered each year. We typically have cases concerning transportation, media, tourism, finance, agriculture, among other sectors.

Do you see similar variety in terms of the countries involved in cases?

We do. We have seen that middle-income countries generally account for a larger share of cases than lower and upper-income countries. As such, regions like South America and Eastern Europe—where a number of middle-income countries are located—tend to have the larger regional representation. But in most years, countries from all regions of the world have cases registered at ICSID. On a side note, last year four states—Benin, Denmark, Norway and Switzerland—had their first cases at ICSID in 2020.

I wanted to talk about diversity next. Encouragingly, we have seen greater interest—and commitments—towards diversity in the field of investor-State dispute settlement. How does ICSID track diversity?

We also track appointments by gender, detailing the percentage of men and women appointed to cases. Importantly, we also report on who is doing the appointing: in other words, the State, the investor, the co-arbitrators or ICSID.

Are we seeing progress with respect to gender balance?

We are seeing progress. If you look at the overall ICSID caseload since 1966—that is, accounting for all ICSID cases—you find that men have accounted for 88% of appointments and women for 12%. In more recent years, the numbers have generally been closer to 80% and 20% for men and women respectively, and last year women accounted for 23% of appointments. So, there is still significant progress to be made, but the numbers are moving in the right direction.

Are there any misconceptions about ICSID that you feel the caseload statistics are useful in correcting?

I think the main one that comes to mind is around the outcomes of cases. You will hear people say things like ‘investors always win at ICSID’ or ‘States always win’. But we measure outcomes and they are consistently balanced between States and investors. Essentially half of cases decided by tribunals have upheld the investor’s claims in part and in full. In the other half, all claims were dismissed, or the tribunal found it lacked jurisdiction.

Also, there may be a misconception that nearly all ICSID cases end up with a tribunal ruling, either upholding or dismissing the investor’s claim. However, more than a third of all concluded ICSID cases—35% to be exact—have been settled or discontinued before the dispute is decided by the tribunal. This suggests that parties to ICSID cases have taken advantage of non-litigious dispute resolution methods, including conciliation and mediation, which remain open to the parties throughout the arbitration.

Is there anything new on the horizon that we should watch for on the caseload statistics front?

Well our next caseload statistics report comes out in July, and will cover the 2021 fiscal year. Over time we have added new categories of information and have made the report more comprehensive. We tweak the design occasionally and are always looking for ways to improve the readability of our charts. I would welcome feedback on the design, as well as on areas that people would like to see us cover in our statistics report.