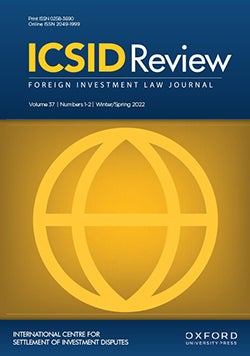 Some twenty years after their adoption in 2001, the ILC’s ARSIWA are a landmark in relation to the responsibility of States for internationally wrongful acts.

The late James Crawford, Special Rapporteur for the ILC on the Responsibility of States for Internationally Wrongful Acts, served as guest editor of the special issue. The introduction to the issue—The ILC Articles on State Responsibility: More than a ‘Plank in a Shipwreck’?—is co-authored by Judge Crawford and Freya Baetens.

While the “Articles were, on any view, a collective enterprise … there is reason to accord particular credit to James for their successful completion and, in turn, for the influence that they have had subsequently in the practice of States and in the decisions of international courts and tribunals,” writes Campbell McLachlan QC, co-Editor-in-Chief of the ICSID Review, in his preface to the issue.

“There is also reason to consider that, among all of his many contributions, the conclusion of ARSIWA stands as his most enduring achievement,” he adds.

Amongst the highlights of the special issue is a comprehensive case survey of the use of the ILC Articles in investment treaty arbitration by Esmé Shirlow and Kabir Duggal, covering cases between 2010 to 2020. The article builds on a survey by Judge Crawford in 2010, published in the ICSID Review, which provides ARSIWA-references in investment treaty caselaw for the period 2001 to 2009.

The special issue also features an annotated bibliography, curated by Kiran Nasir Gore and Gloria M Alvarez, that examines important contributions to the scholarship and literature concerning the ILC Articles, organized by topic.

With over twenty articles, notes, case comments, and book reviews by scholars and practitioners, the special issue is a milestone in the literature on the ILC’s Articles and their influence on international investment law.

The issue concludes with remarks by Pierre-Marie Dupuy on the theme of ARSIWA - a Reference Text Partially Victim of Its Own Success?

“The scholarship on the ILC Articles in this special issue of the ICSID Review is unparalleled,” said Meg Kinnear, ICSID Secretary-General and co-Editor-in-Chief of the ICSID Review. “In the twenty years since the adoption of the ILC Articles, international investment law and dispute settlement have evolved rapidly, and the ARSIWA have played an important role in the interpretation of investment obligations. This special issue provides an exceptional view into the relationship of ARSIWA and investment treaty caselaw and is an invaluable resource for practitioners and students of international law.”

The special issue is available through a subscription to the ICSID Review or as a single-issue purchase. All contributions to the special issue may also be accessed individually at the links below.

Special Issue on the 20th Anniversary of ARSIWA

The ILC Articles on State Responsibility: More than a ‘Plank in a Shipwreck’? by James Crawford and Freya Baetens

Attribution of Conduct to a State by Carlo de Stefano

Post-Termination Responsibility of States? – The Impact of Amendment/Modification, Suspension and Termination of Investment Treaties on (Vested) Rights of Investors by August Reinisch and Sara Mansour Fallah

Swords, Shields and Other Beasts: The Role of Countermeasures in Investment Arbitration by Christian Tams and Eran Sthoeger

Necessity 20 Years On: The Limits of Article 25 by Federica Paddeu and Michael Waibel

Cairn Energy v India: Continuity in the Use of ILC Articles on State Responsibility by Prabhash Ranjan

Unión Fenosa Gas v Egypt: The Necessity Defense: Much Ado About Nothing? by Sarah Cassella

Staur Eiendom AS and others v Latvia: From Warsaw to Riga: The Role of Exceptional Circumstances in the Attribution of the Conduct of State Enterprises to the State under the ILC Articles by Csaba Kovacs

Attribution in International Law and Arbitration by Ivan Cavdarevic

ARSIWA: A Reference Text Partially Victim of its Own Success? by Pierre-Marie Dupuy