Recent years have seen growing interest in the use of mediation as a tool to resolve international investment disputes. This has 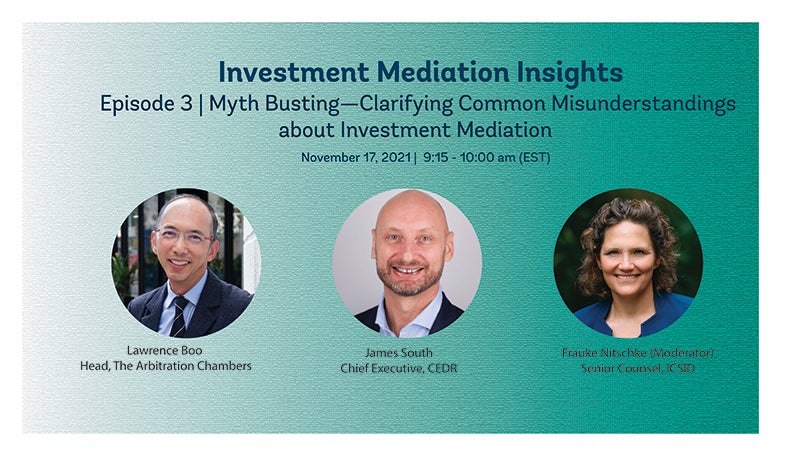 been accompanied by a significant body of resources, training courses and events dedicated to the topic. But as in every emerging field, misperceptions may arise. This episode of Investment Mediation Insights looks misunderstandings about investment mediation—and the best ways to set the record straight.

James South: James is the Chief Executive of the Centre for Effective Dispute Resolution (CEDR).  As a mediator, facilitator, consultant and trainer, James has over 25 years of experience in over 30 countries, working with individuals, organisations and public institutions to prevent, manage and resolve conflict effectively. A lawyer in his native New Zealand, he acts as a mediator both in the UK and internationally, specialising in international commercial dispute. James has worked with governments on mediation policy development and delivered trainings to government officials in the context of investment grievances. James has led CEDR’s cooperation with ICSID and the ECT to develop and deliver investor-State mediator trainings, and worked with both investors and government officials in the context of investment disputes. James also combines his mediating and consultancy skills to provide facilitation, neutral chairing and conflict coaching services to Boards, leadership teams and other groups which find themselves in conflict. James is a fluent Spanish speaker.

Lawrence Boo: Lawrence is a pioneer in the development of Singapore’s dispute resolution landscape. He is closely linked to the SIAC being its first CEO and Registrar and later as Deputy Chairman. He was the pro-tem director that led to the setting up of the Singapore Mediation Centre (SMC, 1996), and a founding board member of the Singapore International Mediations Centre (SIMC, 2010). He was also one of the initiators of the International Mediation Institute (IMI) in 2006. Lawrence has sat as arbitrator in more than 300 cases both in commercial and investor-State disputes and as mediator in more than 100 references. He leads the teaching of international commercial arbitration at the Faculty of Law, National University of Singapore since 1994. He also teaches at Bond University, Australia. For his contribution to the development of international arbitration and mediation, Boo was conferred the Bintang Bakti Masyarakat (BBM) (The Public Service Star) by the President of Singapore in August 2009.