In the previous edition of Investment Mediation Insights, we looked at investment mediation through the eyes of the investor. In 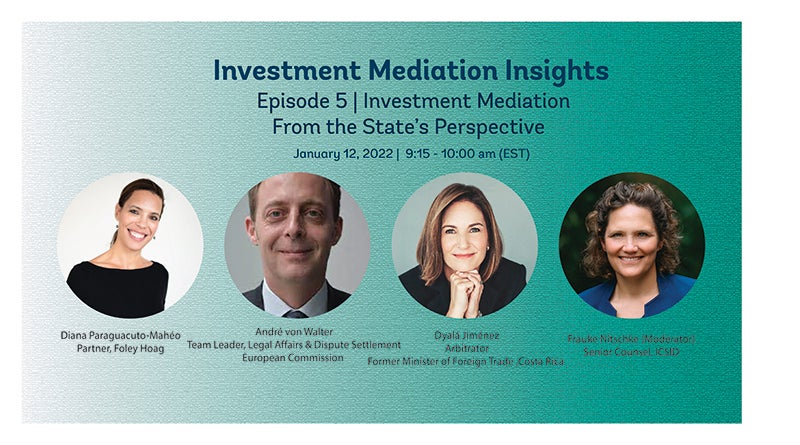 Diana Paraguacuto-Mahéo: Diana is a partner in Foley Hoag's Paris office where she specializes in international arbitration and litigation, alternative dispute resolution (ADR) and sovereign representation. Diana regularly serves as counsel in complex arbitral proceedings notably in investment arbitrations where she represents States and State entities. Diana further acts as mediator, arbitrator and emergency arbitrator in commercial disputes. Diana is also a court member of the International Court of Arbitration of the ICC. She is also the co-chair of the ICC French Committee task force on ADR and Arbitration and the President of the Global Pound Conference in Paris. Diana teaches arbitration at Sciences Politiques in Paris and at the law school Paris-Pantheon Assas. She also teaches mediation at the University of Montpellier.

Dyalá Jiménez: Dyalá is a Costa Rican national and specializes in international arbitration. Dyalá served as Minister of Foreign Trade of Costa Rica from July 2018 to August 2020. In that capacity, she was in charge of negotiating the trade agreement between Central America and the UK per the effects of “Brexit”, resolving disputes arising from the sanitary restrictions applied by Costa Rica to the Central American ground transport, and dealing with complex issues involving the country’s accession to the OECD, among others. She currently serves as a member of the Board of the Costa Rican Chamber of Commerce. Dyalá is frequently appointed as arbitrator in institutional and ad hoc arbitrations, both in commercial and investor-State matters. She is a member of the ICSID Panel of arbitrators and conciliators and member of the ICC International Court of Arbitration.

André von Walter: André is leading a team of lawyers working on investment law and dispute settlement in the Directorate General for Trade of the European Commission. His recent work focused on developing the European Union's approach to investment dispute resolution. He represented the EU in bilateral investment negotiations with Singapore, Canada, Vietnam, Morocco, Japan, Mexico and the United States. He also acted as the EU chief negotiator for the UNCITRAL Transparency Convention and represents the EU in UNCITRAL's current work on ISDS reform. Prior to his current position, he worked as a political advisor and negotiator for international investment at the French Ministry of Foreign and European Affairs. André von Walter has lectured public international law and international economic law at the University of Paris (Panthéon-Sorbonne) and worked as a Senior Research Fellow at the Institute for public international law of Bonn University.